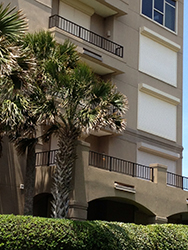 It is recommended that you lower your hurricane shutters while you are not in residence. Under the rules of the Association, if you have not lowered the shutters and there is resulting water intrusion, you will be held responsible for any damage to not only your own, but to any other unit damaged as a result of your failure to lower your shutters.

Our shutters are not like electric garage doors. If they meet resistance or something is in their path, they will continue to attempt to close (unlike electric garage doors that will reverse if encountering resistance or something crosses the eye beam). The shutters may be damaged if they are not stopped immediately. Once the shutters are started to be closed, it’s important that they be closed completely. Otherwise, the shutter will not correctly unroll. If you desire to have the shutters partly open, unroll fully, and then raise to the desired level. Then, completely open the shutters until they stop automatically. Never lower the shutters, again, after partially opening them before fully raising them.

Batteries & Service. Each unit should have a battery backup pack in case of a power failure. Please read the instructions and keep the power pack charged at all times. We recommend you periodically use the back up battery to assure proper operation.

Battery Operation of the Shutters in Case of an Electrical Outage:

Use of the Light:

IMPORTANT: It is recommended that the battery be used periodically each year by actually operating a couple of shutters with the battery.